CURRENT APPROACH TO PUPIL-BASED MEASUREMENT OF COGNITIVE WORKLOAD: THE ICA

The Index of Cognitive Activity (ICA) is a patented metric developed by Dr. Sandra Marshall and commercially available at http://www.eyetracking.com.
The ICA is based on the transformation of pupil diameter through signal processing algorithms of wavelet analysis. It focuses on the dilation reflex but also takes into account both the rapid constrictions of the pupil that result from increased light and the relatively slow dilations that result from accommodation to decreased light. The impact of the light reflex is reduced so that the dilation reflex can be measured.
In the ICA, wavelet coefficients are converted into a second-by-second index ranging from 0 to 1, with low values corresponding to low mental effort and high values corresponding to extreme mental effort. The Index is roughly the proportion of observations in a second that reflect significant mental effort, with signal smoothing to eliminate statistical noise and hardware anomalies.
One advantage of using wavelet analysis is that it preserves both time and frequency information. Thus, when a large value for the ICA is observed, it is possible to map it directly back to the specific instance in the task in which it occurred.
The figures below give an example of how the impact of light may be managed in the analysis of pupil dilation. The data come from a published study.  [see REFERENCES — Marshall, S. P. (2007a)]
The first figure shows the raw pupil diameter of one individual measured for two minutes in each of four different test conditions: sitting in a normally lit room (upper left), sitting in the dark in the same room looking at the same dark blank screen (upper right), sitting in the light in the same room while responding to a series of verbal arithmetic problems (lower left), and sitting in the dark in the same room while responding to another series of verbal arithmetic problems (lower right). In all conditions, the individual was asked to face a dark computer screen which was never turned on. 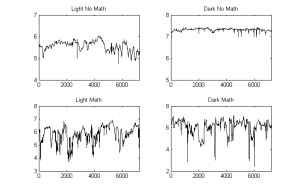 Thus, these four pupil signals represent two different situations: cognitive task versus no cognitive task (lower two versus upper two) as well as light (leftmost two) versus dark (rightmost two). Time is on the x axis, and pupil size is on the y axis. Each graph shows all pupil values across the full two minutes of testing. Pupil size ranges from 3 mm to 8 mm. The mean pupil diameter values for the four conditions for this subject were: 5.57 mm (Light No Math), 7.32 (Dark No Math), 5.83 (Light Math), and 6.04 (Dark Math).
The figure below shows the result of applying wavelet analysis to the pupil signals of the above figure. The x axis is time, and the y axis is a coefficient derived from wavelet analysis and used in the calculation of the Index of Cognitive Activity. Importantly, all four panels below are plotted on the same scale for the y axis, from -0.1 to +0.1 so they may be directly compared to each other. 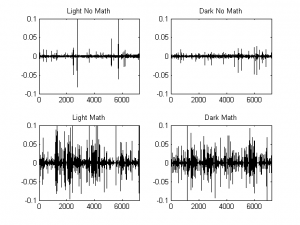 Result of wavelet analysis of the five pupil signals shown above

Consider first the impact of cognitive task (lower two) versus no task (upper two). The coefficients in the top two panels are considerably smaller in values than in the lower two. Now consider the impact of light. There are only slight differences between the top left and top right (no math) as well as between the lower left and lower right (math). Mean absolute values across the four plots are 0.0011, 0.0008, 0.0037, and 0.0033 for the conditions of Light No Math, Dark No Math, Light Math, and Dark Math respectively. The two means obtained in the presence of the cognitive task are larger than the two means obtained in the absence of the task by at least a factor of three, with little impact due to the presence or absence of light.
The wavelet coefficients such as those plotted above are the foundation for the Index of Cognitive Activity (ICA). The coefficients are converted into a second-by-second index ranging from 0 to 1, with low values corresponding to low mental effort and high values corresponding to extreme mental effort. The Index is roughly the proportion of observations in a second that reflect significant mental effort, with signal smoothing to eliminate statistical noise and hardware anomalies. To maintain consistency in the ICA across eye tracking systems that have differing sampling rates, all pupil signals are standardized to 60 Hz before indexing.
To return to the above example, the four ICA values for the data shown in the figures are 0.10, 0.15, 0.47, and 0.38 for the four conditions. As reported in the original publication of the study, a repeated analysis of variance across all 30 subjects in the study revealed a significant difference in the ICA for the task factor (present vs absent) but no significant differences for either the effect of light or the interaction between task and light.
One advantage of using wavelet analysis is that it preserves both time and frequency information. Thus, when a large value for the ICA is observed for a particular second, it is possible to map it directly back to the time in the task that it occurred. And as shown above, we can also average the ICA across an entire task to get an average level of workload for an individual on the entire task.
The ICA relies on a pupil signal delivered by an eye tracker. The ICA has been validated with most eye trackers from several of the leading eye tracker manufacturers, confirming that the ICA is a truly independent metric, and not an artifact of, or reliant on the specific processing algorithm of, any one eye tracker manufacturer.
In summary, the Index of Cognitive Activity works as desired: as individuals engage in progressively difficult tasks, their ICA values go up. The ICA is sufficiently sensitive to be used to identify the periods of intense workload for an individual during a task as well as sufficiently stable to be used to measure task load of multiple tasks. It is not hardware dependent. Moreover, the pupil-based ICA satisfies the four basic requirements of a physiological metric of workload: it reflects brain activity, it is a continuous signal, and it can be measured unobtrusively. The remaining requirement—use in real-world settings as well as the laboratory—is discussed in REAL-WORLD APPLICATIONS OF COGNITIVE WORKLOAD.
Share